Back like we never left. Spanish is really hard. Argentina is sick.

Bienvenidos from Buenos Aires, and welcome to Backpackin'! If you want to join 821 others reading about this weird trip around the world, add your email below:

I'm in Buenos Aires, Argentina right now. For this visual learners, it is way, way down south. 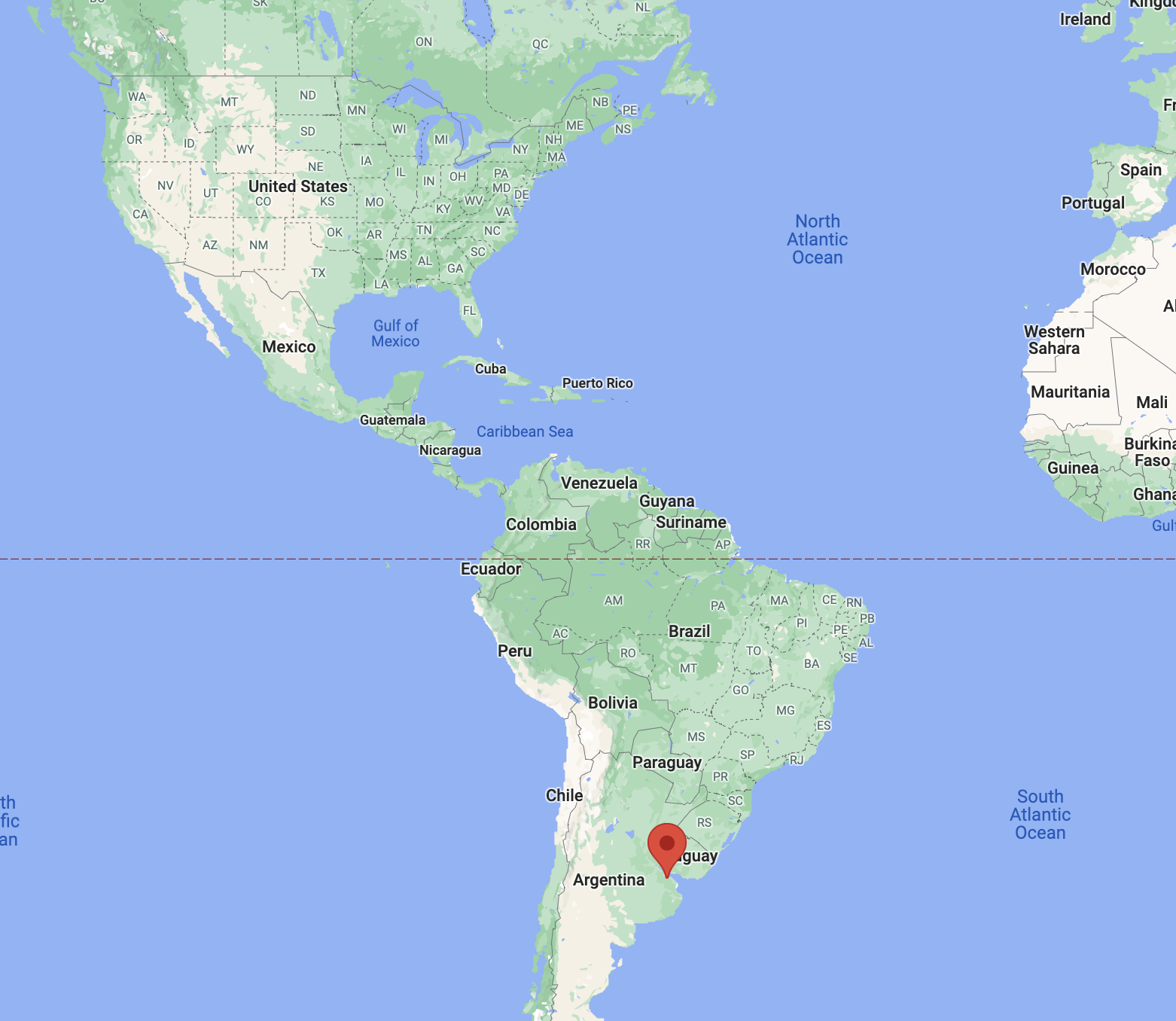 For perspective, the flight from Atlanta to Buenos Aires was 10 hours. It's the same length as a flight from London to Vegas. Pretty shocking, no?

Why Argentina? Because I studied Spanish in college. However, I haven't spoken español in 2.5 years. While traveling Spain last fall, I realized that my Spanish is now basura (trash) lol. My good friend Canadian Mike wanted to go south for winter, and I decided to make the trip as well. (Mike will be here on Thursday).

If you have been following me for a while, you probably grew accustomed to my routine in Europe:

Explore a new city, party way too much with random people that I met in said city, write a lot of words, eat some good food, and do it all again in a new city five days later.

Looking back, I honestly don't know how it didn't kill me. I had one big night last night (I am writing this on a Sunday), and I was down bad this morning. Entropy is really kicking my ass out here right now.

That routine is no more (at least for now). Believe it or not, I HaVe A jOb. My prior four months of cerveza-fueled writing have yielded some interesting opportunities, and I now write my own finance blog, work for an anonymous meme page, and do a dozen random side projects.

And I love all of it, making more money than I did in my old job while booling in South America is sick. But it also means that I can't go full-send to 20 countries in 4 months.

No, for this season of my travels, I'll mainly be in Buenos Aires, with some weekend trips to other areas around Argentina/South America.

I also might change the format some. Some days I literally write all day, and no one wants to read about that. These blogs are going to be more free flowing, without separating specific activities on specific days.

But that's enough of that, let's dive in 🤝

It is a long freaking flight down here. Ten hours straight. I paid a bit extra for the Delta Premium seats, definitely worth the extra $300 or so. 50% reclining seats, more room, no seat mates, and quicker boarding/onboarding. Highly recommend.

There is a direct overnight flight everyday from Atlanta to Argentina, so I got to the airport around 5 PM on Monday. Security was shorter than I expected, so I killed a couple of hours at the airport bar. And I shared my boredom with the Twitter-sphere.

10 hour flight at 9:00. Will drink 1 airport beer for every like this gets

1900 likes later, I realized that there was no way possible for me to live up to my word (though I did try).

The flight was chill. I didn't sleep much. Seriously, how do you sleep with a mask over your face? The wildest thing was how long it took to traverse South America. It only took ~2.5 hours to reach the north coast of the continent. Then another 7 hours to actually reach Argentina. This continent is freaking huge.

With a 2 hour time change and 10 hour flight, I arrived at 9 AM Tuesday morning.

To my surprise, I didn't have to show anything other than my passport to board the plane in Atlanta. However, I had to show a million documents to customs in Buenos Aires. Honestly I'm not sure if I even had all of the right stuff. I just pulled up random emails with my name next to them and said, "Está bien" over and over again.

I exchanged $200 for pesos in the airport and got a taxi to my hostel. (for those curious, the exchange rate is way better in the city at Western Union than at the airport. It's more than 200:1 pesos to dollars. Us Americanos are rich down here). 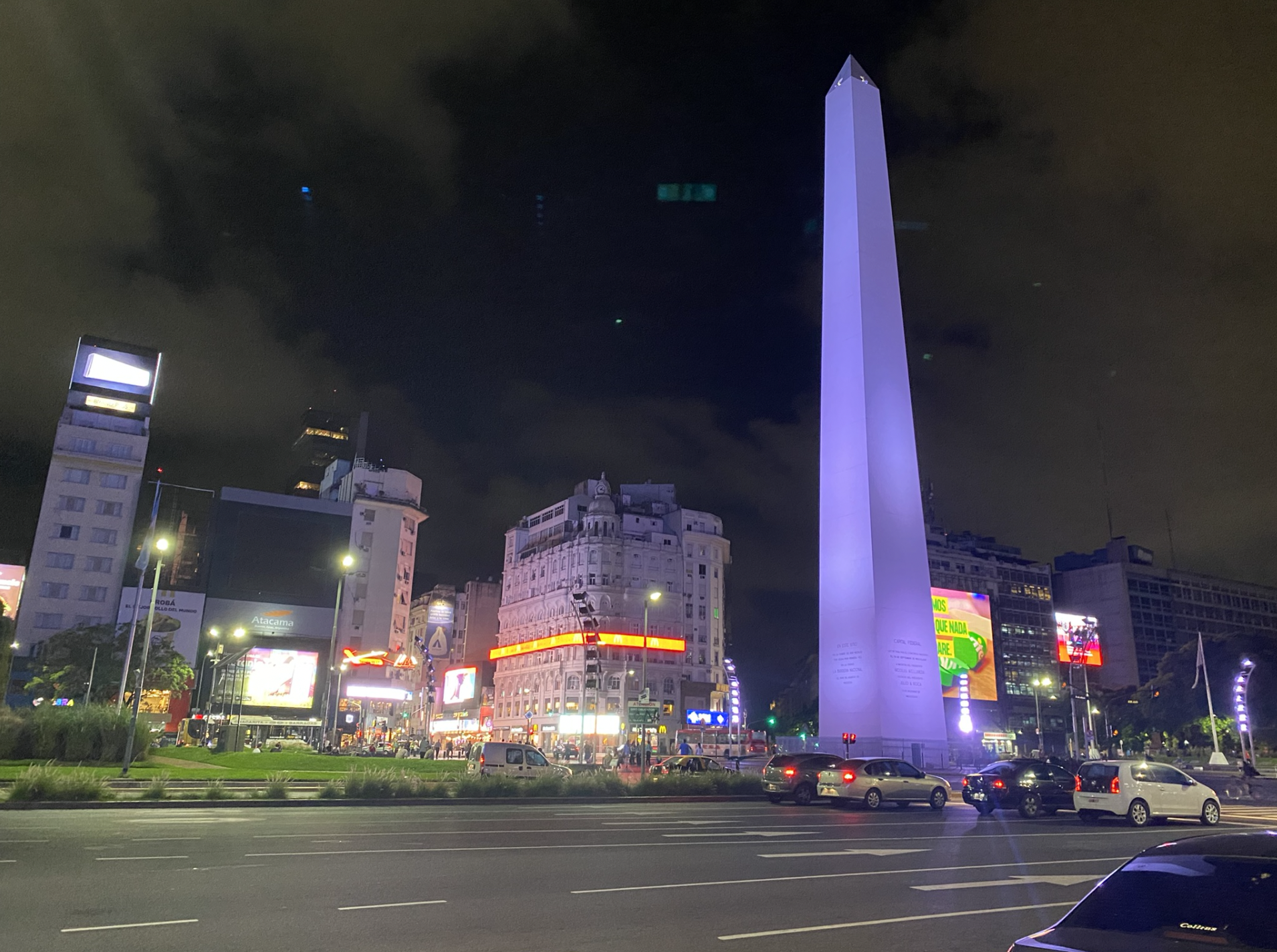 My hostel, Viajero Hostel, is awesome. A massive pool, outdoor bar, nice facilities, and travelers from all over. I have been hanging out with Brits, Belgians, Germans, Brazilians, Spaniards, French, Chileans, and Americans.

Since I am finally generating some revenue again, I opted for a private room. $40 a night for my own bed, own space, and own bathroom is 100% worth it. I had like 4 different articles due this past weekend, so I spent most of the week grinding on my Mac.

However, I did make sure to have some fun. Besides boolin' at the pool, I got out and explored the city some and made sure to see the nightlife with my fellow viajeros.

In Argentina, you go to dinner is at 10, pregame at midnight, and bars/clubs at like 2. Everything is late af here.

My first night I went to dinner by the water with a big group from the hostel before heading to a local bar with another American and a Swiss guy, Paulo and Xavier. Good lads. 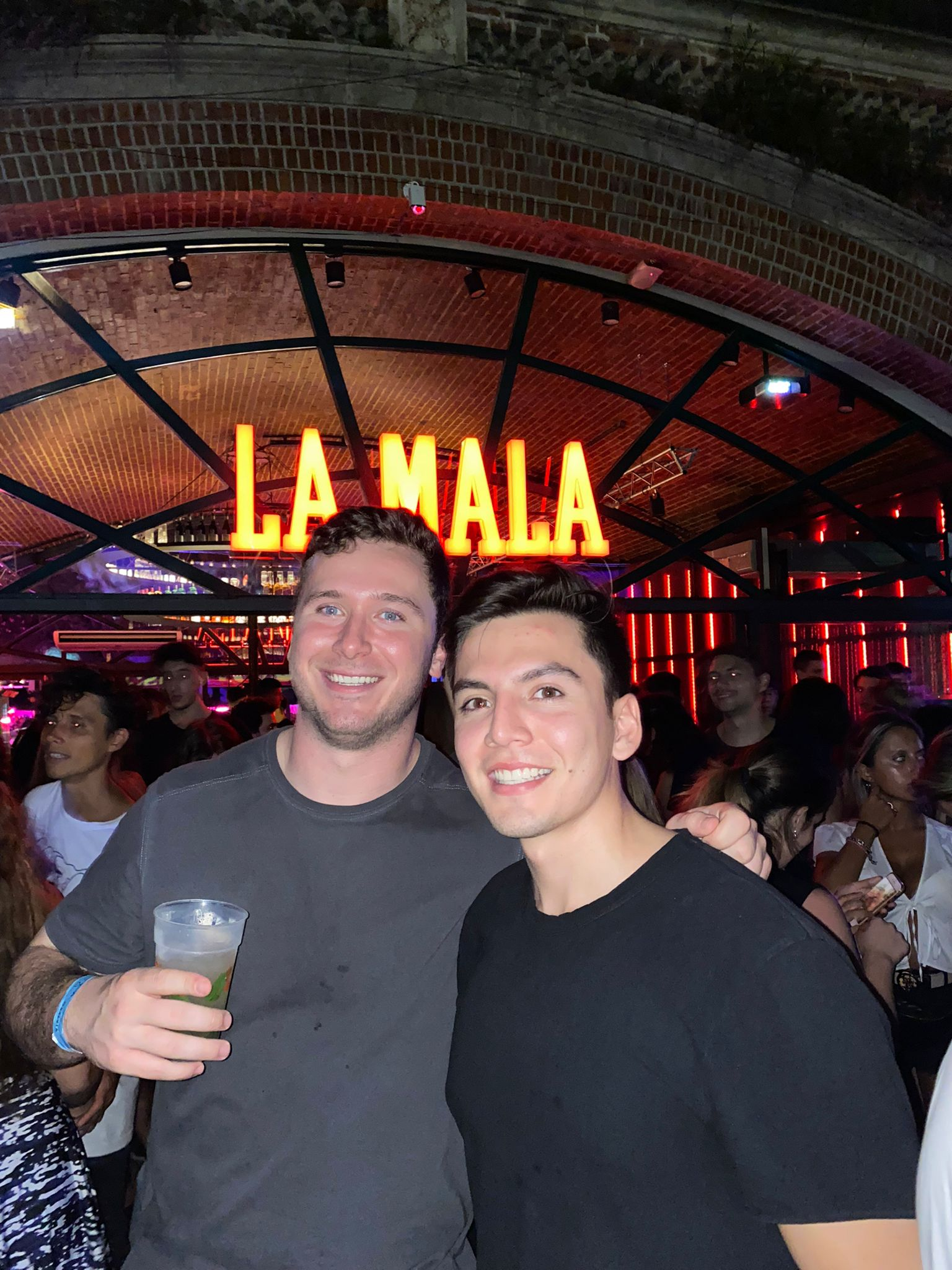 Me and Paulo having a good time!

However, my most entertaining meal came at lunch yesterday. Me, Rodrigo (a Chilean guy), Ward (Belgian), and Daniel (French). That's four different native tongues, and we all tried communicating in a mix of English and Spanish.

The funny thing about multiple languages is when people try to directly translate phrases. It doesn't work, and the results are hysterical. Rodrigo asked us if we "knew the Pacific Ocean" and we all lost it.

In Spanish, conocer means both "to know" and "to have visited". Obviously in English it's not the same. Rodrigo also said that he knew Daniel was gay, because of his "corporal actions" which is the funniest thing I've ever heard. In Spanish, corporal means having to do with the body, and he was referring to Daniel's mannerisms.

Daniel is, in fact, gay. And he was laughing so hard at the description that he almost spit our his coffee. Languages are hysterical. 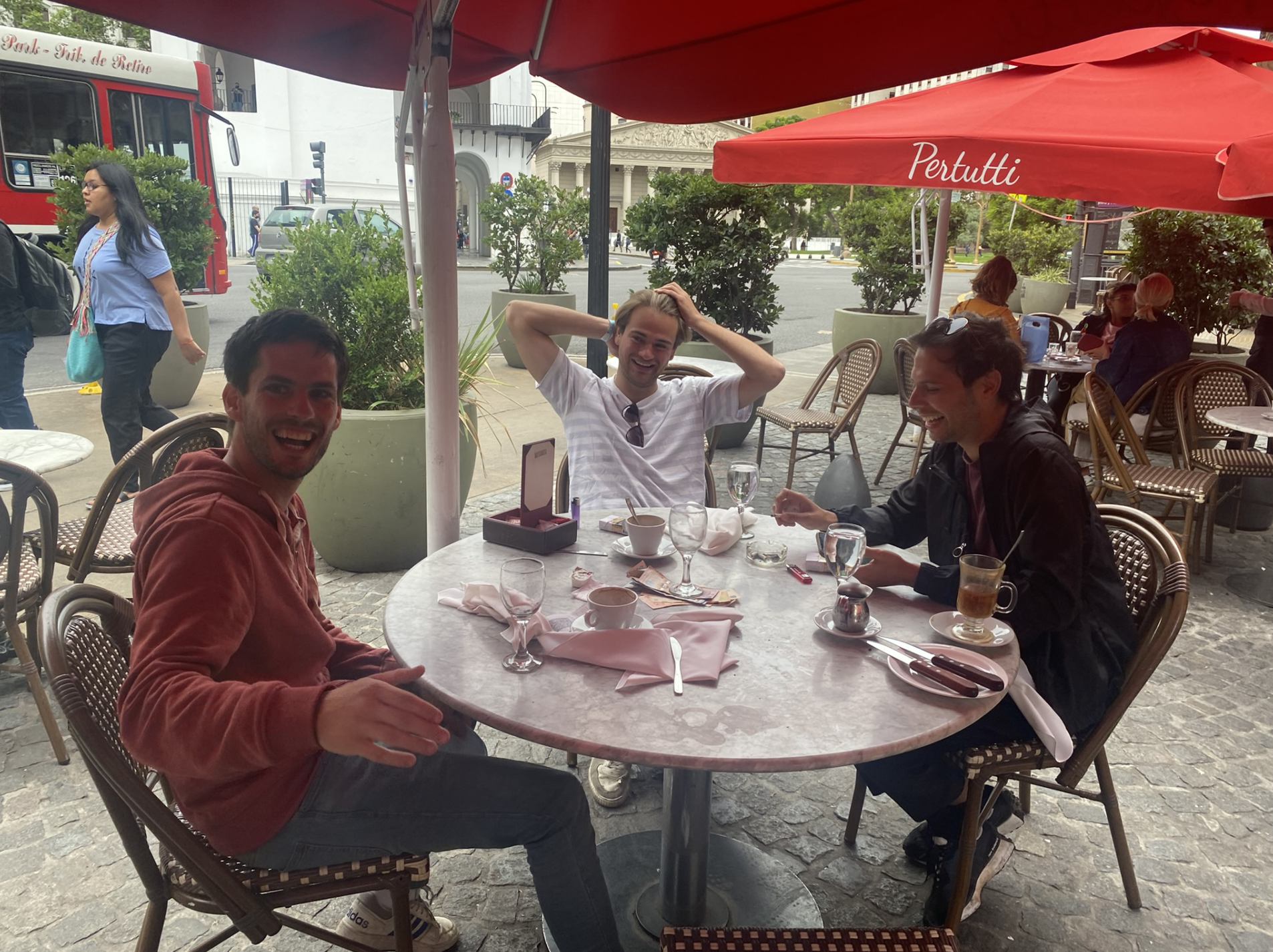 Besides funny lunches and big dinners, I attended a Tango show (which was badass) and got a taste of the Buenos Aires nightlife. This place is cool af, not a bad spot to wait out the cold in America. 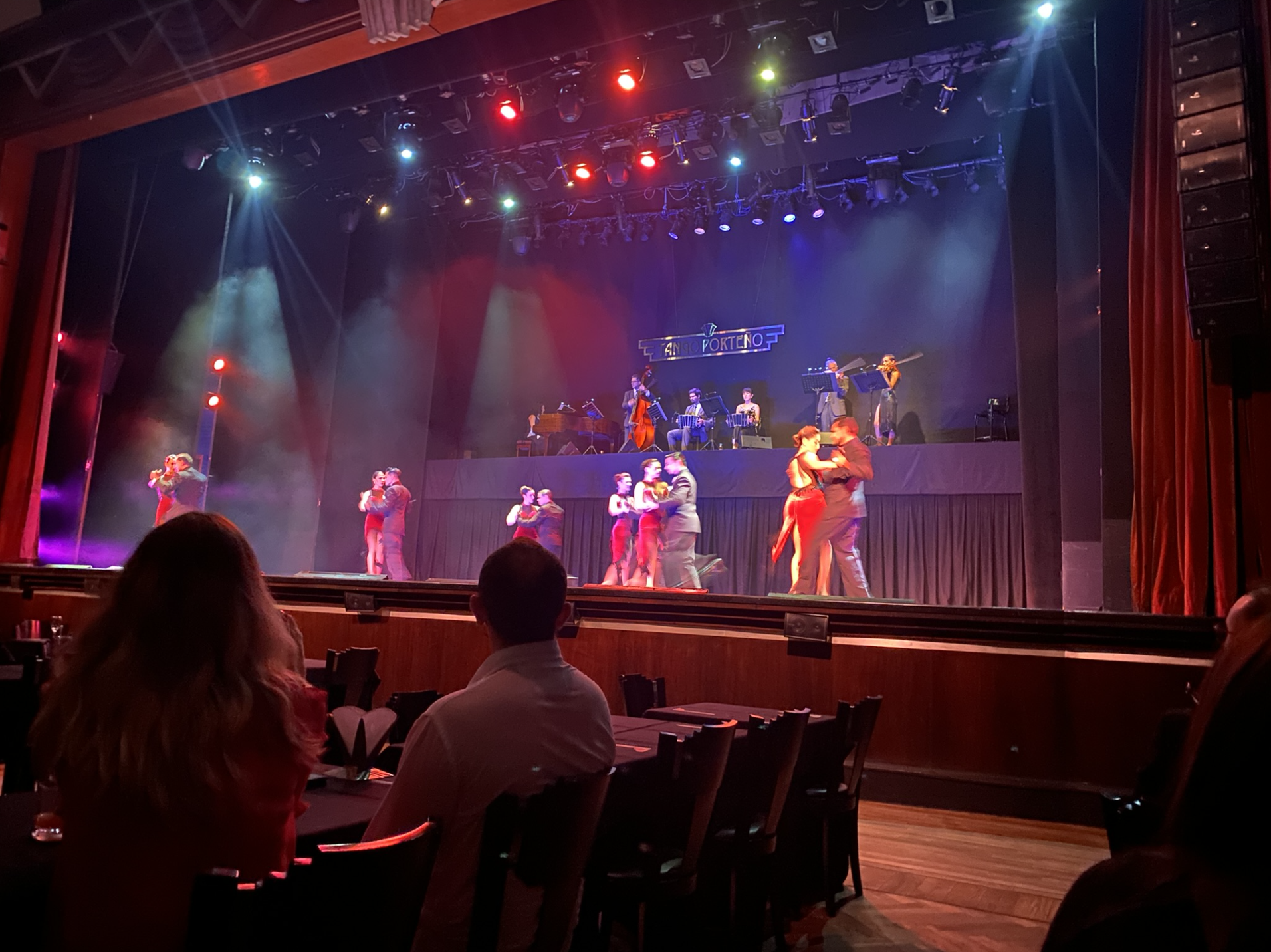 Languages are also ridiculously hard. I studied Spanish. Mainly the Spain version of Spanish. When you haven't practiced it in years and you are in an entirely different environment, that stuff is so difficult to pick back up. There are plenty of Spanish speakers at the hostel, and I have tried practicing with them. It's getting better, slowly but surely.

You know when you're talking to someone from Latin America in the US, and they are clearly struggling with English? We often think that their English "sucks". Let me tell you something, I have mad respect for non-native English speakers shooting their shots. It's hard, sometimes embarrassing, and incredibly frustrating. Kudos to those who try learning multiples languages.

Besides escaping the cold, the main reason that I came down here was to force myself to practice Spanish. And what's the best way to practice Spanish? Speaking to people in Spanish, obviously. And what is a situation where you have to talk to someone for an extended period of time?

So what did I do? 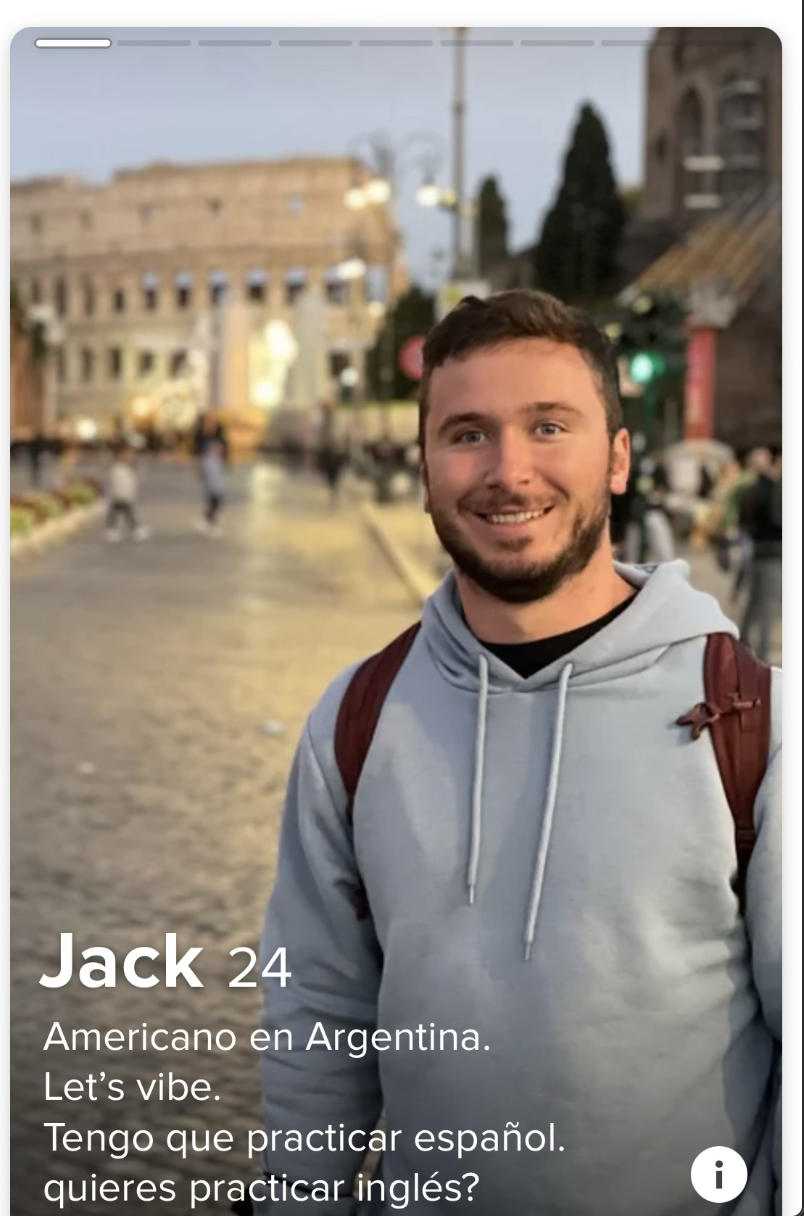 See, Spanish classes are like $200 a week. But I can just speed date random Argentinian girls that don't speak English, and get the same practice for half of the price.

A white dude named Jack who worked in finance is literally the most boring thing ever in the US. In Argentina? I'm ⭐️ exotic ⭐️ lmao. I actually got dinner with a girl who spoke like zero English Friday night, and my brain hurt so bad from only speaking Spanish afterwards. It literally felt like a word-hangover.

But yeah I think I'm just going to skip Spanish classes and serial date locals until I'm fluent. You couldn't script a worse reality tv dating show if you tried. @Markmoran, see if you can hook up me with the folks at F Boy Island once I'm back stateside.

Also, the verb "coger" means to take. However, it also has a double meaning in Spanish, that is a bit more nefarious in nature. So I wouldn't recommend saying that you are going to "coger" an Uber home. It sounds like you have a really odd car fetish. Unless you're in to that sort of thing. 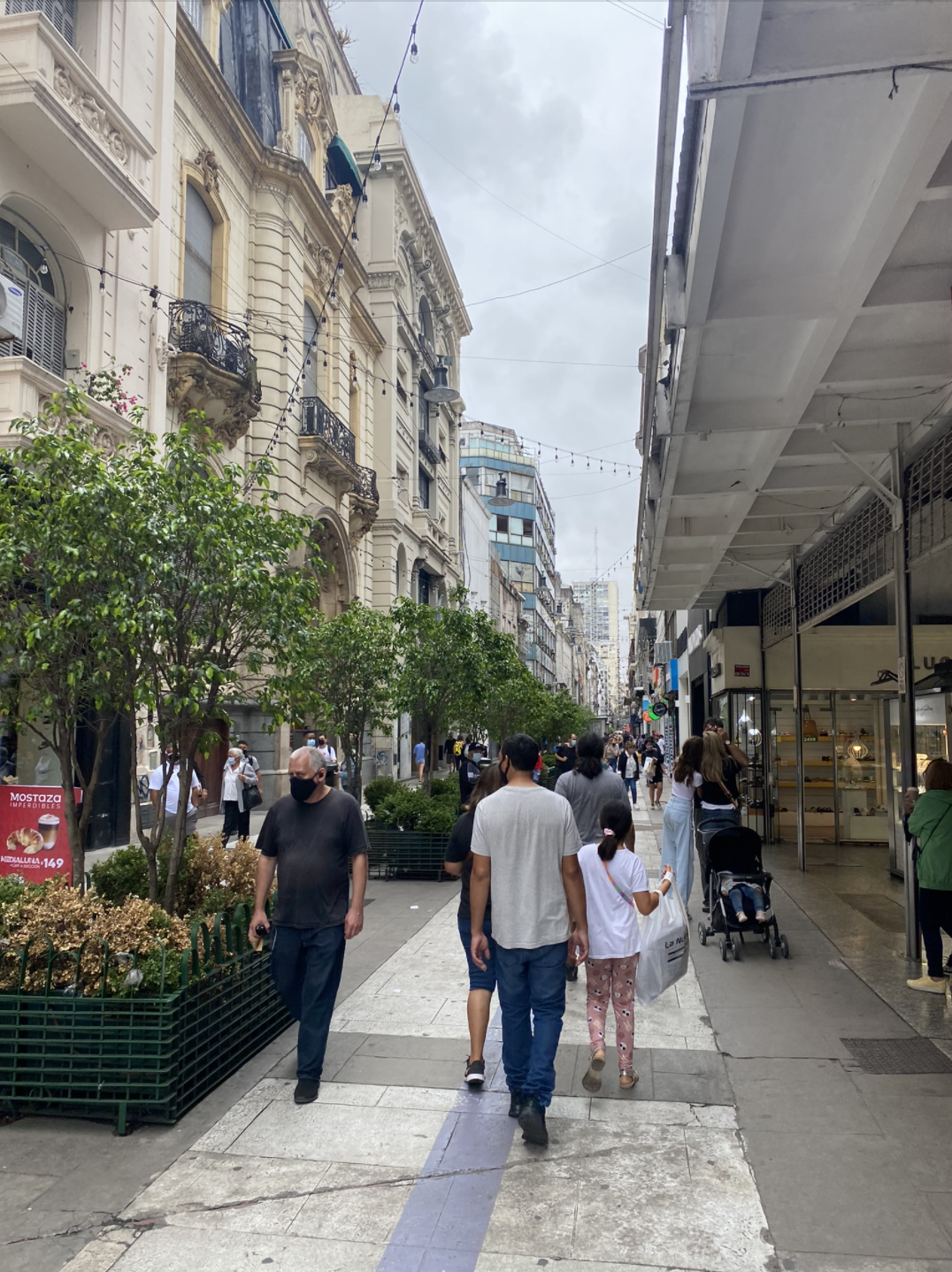 In Lisbon back in December, I hung out with a guy named Nic. Nic is half American, half French, and he was doing the whole digital nomad thing while working abroad. Cool guy. Nic posted an Instagram story from Buenos Aires on Friday, which was wild. Because I am also in Buenos Aires.

So we got lunch today. Turns out he just happened to travel down here at the same time as me. The fact that some dude I met in Portugal is in the same city as me in South America is nuts.

A Belgian dude, Panda, that I met in Lisbon is also coming to Argentina soon. Another Belgian dude, Sebastian, that I met in Berlin with Hudson is currently in Chile with a Chilean girl that he fell in love with while backpacking Europe a few months back (real Hallmark stuff. That's an interesting love story). 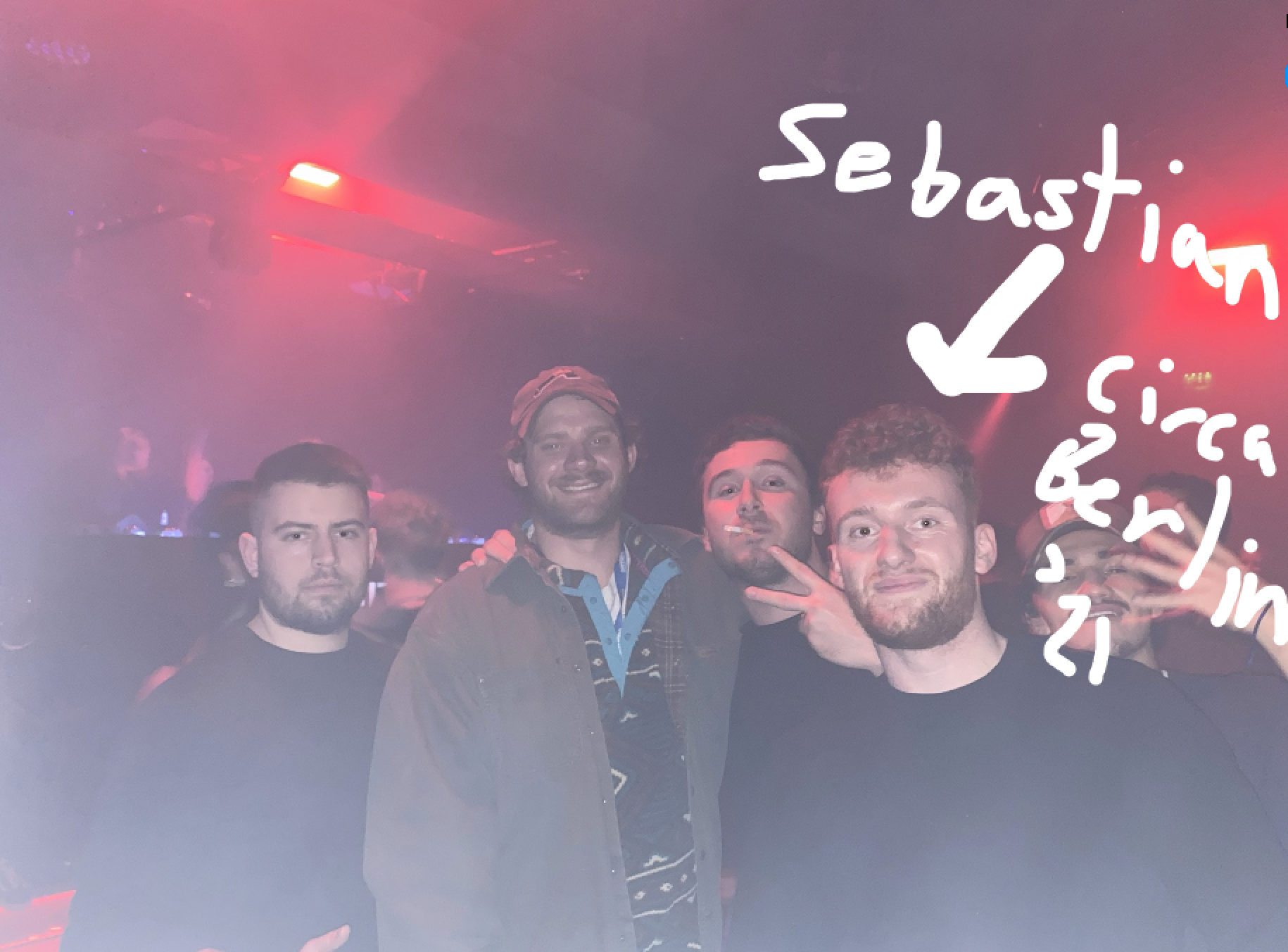 And I think there are a few other cast members from my Euro journey around here somewhere.

The world is big, but not that big apparently.

I will be writing like 30,000 words on internet this week. Pray for me. Also, Hurricane Mike arrives on Thursday. We both took salsa lessons before coming down here, so I guess we'll see who is a better dancer. In the meantime, I'll probably hang out with Nic one night, and try serial dating some more locals who don't speak English.

By the way, I am literally typing these words as they hit my brain. No editing, no nothing. Now raw brain juice throw on the internet. So don't shoot me if this isn't Pulitzer-level stuff. It is the spontaneous production of my incredible smooth brain on a Sunday afternoon.

See below for the previous and next chapter: